ALL THAT WE’VE LOST
Although this wasn’t originally written as a duet when I penned it in October 2011, it seemed to lend itself to a shared vocal – and having done a bit of singing with Jo when up north that month she seemed the obvious Dolly to my Kenny. I think it sounds great this way.

We built our love, On the pretence,
Of shared ideals, And common sense,
But the truth, Was something near,
Convenient timing, And sullen fear.

Still I don’t know, Why you ask,
If I still love you while you’re taking me to task,
As I whisper my riposte,
I see that now we’re counting up the cost,
Of all that we’ve lost.

I saw you first, Outside a bar,
Persevering with a cigar,
I took you me home, Before the bell,
You woke the neighbours, With every yell.

Now I don’t know, How to react,
When I hear that you’re distorting all the facts,
As I whisper my riposte,
I see that now we’re counting up the cost,
Of all that we’ve lost.

Still I don’t know, Why you ask,
If I still love you while you’re taking me to task,
As I whisper my riposte,
I see that now we’re counting up the cost,
From all the times you saw me double crossed,
And all that we lost. 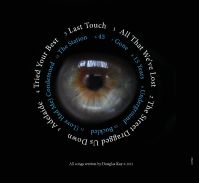 THE STREET DRAGGED US DOWN
Written on the snowy afternoon of Christmas Eve 2009 while watching  An Affair To Remember. This was inspired by a line Cary Grant delivers to Deborah Kerr in the film although I subsuquently discovered that the line was actually “we used to read each other’s thoughts” rather than “know each other’s thoughts”. Still, I think my line fits quite nicely.

We used to know each other’s thoughts,
Now we’re just raging,
We were on show and couldn’t be stopped,
But now we’re like two whiskies aging…

And gangways were crossed,
With steps from fastidious feet,
Between expectations we never could meet.

We were let down gently at first,
Then out came the bludgeon,
So I slept around and you did much worse,
But now no-one’s judging…

And gangways were crossed,
With steps from fastidious feet,
Which turned clumsy when back on the street.

We used to see only ourselves, We had tunnel vision.
We never made it up to the top,
We couldn’t get high enough,
In spite of our thoughts,
The street dragged us down.

I took you outside Christmas Eve,
To see the snow lying,
But you were away,
Back into hiding.

ADELAIDE
This song was written in Aug 2008 and pretty soon became a mainstay of the live set, both solo and with the band. Live versions have variously featured Paul Gilbody, Martin Philip and Chris Coultas – here it’s Jo doing the backing vocals towards the end. I’ve been to Adelaide a couple of times…I reckon I’ll  probably go back sometime.

You want to take me to the place that matters most to me in all the world,
To see if – I feel the same,
But I’m going back to Adelaide to see if I can find that girl,
And if she – still knows my name.

I cannot see why she’d welcome me…
If in time I get to her I’m going to confess my lies,
And hope that – forgiveness comes,
And if she will listen and allow me to apologise,
Then I will be the prodigal son.

I cannot see why she’d welcome me,
I can’t see how I can go back now.

And when I see her I’ll bring a gift, One with which I might heal the rift,
And try to be there, Once again for her.

Weakness can be permanent but surely if you’re by my side,
You’ll notice – I will improve,
If I get to Adelaide there’ll be nowhere for you to hide,
Your love will carry me through.

Written in October 2008, another song which has become a regular live inclusion. When a friend mentioned that he thought the middle eight had a Neil Finn-esque vibe I was very pleased.

If you’ve tried your best, To let her be,
Who she wants to,
If you’ve sacrificed, The things in your life,
That made you who you, Wanted to be…

If she goes just leave her be,
For there’s no way she’ll ever see,
That she’s in the wrong,
And you were the only one…

If you gave her time, To clear her head,
Time without you,
But she met someone, With whom she could have some fun,
So unlike you…

Once she’s gone just let her go,
’Cause pleading won’t bring her back home,
There’s no way that she’ll ever know…

When she leaves just let her be,
’Cause there’s no way she’ll ever see,
That she’s in the wrong,
And you were meant to be…her one.

LAST TOUCH
The opening piano phrase of this one came way back in 2003 but wasn’t developed into a full song until 2005. As with most songs this can be interpreted as being about various things, but boys from my high school will have some ideas regarding one of the main inspirations behind it.

If I must leave you crying, Know inside I’m dying,
If only we could see this from before…

Panicked situation, Whiff of desperation,
If only we could see this all before.

Here comes the show,
And it seems we just can’t say no,
So we feel we must go right on kicking the can…

45
A little guitar piece which I’ve had lying around for years, but it fits nicely as a little prelude to Gone.

I was gone, Before I even got home,
And your note, Was already burning a hole in my coat.

And though you can’t see, The scars on your back,
They’re still right there on you,
When you stitched them yourself, With an unsteady hand,
Chances are they were always going to open up again.

Tired eyes, Tired of delivering those tired lies,
Still you stand, As if you never realised what you had in your hands.

Though you can’t see, The scars on your back,
They’re still right there on you,
When you stitched them yourself, With an unsteady hand,
Chances are they were always going to open up again.

15 years gone, And dreaming still,
Long enough, For me to have had my fill.
15 years passed, Their only trace,
A limp in my walk, And lines burned into my face.

But what can you say, When love fades away,
And who’ll take the blame?

When all you’ve seen, Comes back in your dreams,
And the things that seemed nothing, Are worth more than anything.

15 years gone, And thinking still,
Long enough, For anybody to rebuild.
Like models on stage, They strutted by,
And now if they talk, They don’t look me in the eye.

The time on my hands, Turned to blood as I stood there looking grand,
And who’ll take the blame…

But what can you say, When love starts to fade,
And who’ll take the blame?

UNDERGROUND
Written in Jan/Feb 2012. This song was given a good reception by my fellow members of The Mutual Slating Society – I took on board one of their suggestions for the final version and ignored the other.

Switching our lives to down here,
A subterranean, Distraction from our fear,
And up and down the platform songs are sung,
Of reconciliation,
Ukelele-banjos proclaim things of which we dare not hope.

BUCKLED
Written in 2009-2010, Buckled is something of a travelogue.

Everyone has somebody who’s buckled them,
My one runs a bookshops just south of Montreal,
We had sunshine in Saskatchewan in summer,
I was alone in East Vancouver by the fall…

Sometimes we go on to do the buckling,
Try to do the things we think will help us stand up straight,
So I moved in with a girl I met in Sydney,
To be left with just a note was her fate.

And all that stays, And I’m still broken,
And I try all my old tricks,
But my buckled self, I will not fix.

Over time we tire and we lose our verve,
Weary of the games we used to find such fun to play,
So I married through indifference in Queenstown,
I had lost what made me charming anyway.

And all that stays, And I’m still broken,
And I try all my old tricks,
But my buckled self, I will not fix.

(LOVE HAD ME) CONDEMNED
I wrote this between Dec 2007 and summer 2008, and as with Last Touch it all came from the opening piano phrase which here is pentatonic. I had been playing a lot of beautiful old Scottish tunes on the piano and wanted to write something based around the pentatonic scale to evoke that kind of feel. I think the story also gives it a bit of a folky vibe.

I had given her my life, When she was but still a lass,
So my life’s been hard to live,
In the days since she has passed,
Since she passed.

I had nothing to my name, But a nylon-stringed guitar,
When she drove me to her house,
In a 1959 Austin car.

All was lost right then,
Her love had me condemned.

I would watch her as she worked,
And I’d work her after that,
And she’d swear that she would die if I left her,
I’d swear I’d die right back.

All was lost by then,
Her love had me condemned.

There was no returning from there, I’d been captured by her red hair,
And the lips that kissed me late into the night,
And then told me of the love she’d saved for me.

She had slept for sixteen days, But she woke to say goodbye,
With her red hair turned to grey,
But the look she’d always kept for me…
Still in her eye.

THE STATION
Written in spring 2010, this partially a cappella version was inspired by a discussion of the Mutual Slating Society where we floated the idea of each writing an a cappella song. I had already recorded this with a view to including it on the album, but only then did I think of stripping it right down.

Now standing here, I opt to confess,
Accept the blame, For causing this mess,
Seems only fair, After so long,
I act like a man, Admit I’ve done wrong.

But all I can see is the train and it’s moving,
Away yeah,
Moving away, yeah,
So I stand here, Talking to myself.

The platform has cleared, Except for the birds,
Who take to the air, Avoiding my words,
Which I left too late, To speak as I’d feared,
You were away, When I got here.

And I know that you’re on the train as it’s moving,
Away yeah, Moving away yeah,
You’re on board, So I’m talking to myself.

The station is closed, But here I remain,
Alone on a bench, Repeating your name,
As if you can hear, As if given time,
I’ll call you back home, Make everything fine.